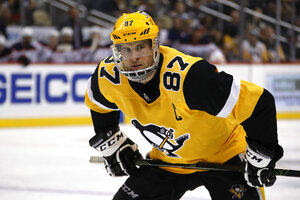 PITTSBURGH (AP) — Sidney Crosby is back.

The Pittsburgh Penguins captain will be in the lineup on Tuesday night when Pittsburgh faces Minnesota. Crosby hasn't played since undergoing abdominal surgery on Nov. 14.

The Penguins have thrived in spite of the extended absence of the three-time Stanley Cup winner. Pittsburgh is 18-6-4 since Crosby's last appearance on Nov. 9, tied for the second-best mark in the league during that span.

Crosby had been dealing with a core injury before aggravating it against Chicago on Nov. 9. He had five goals and 12 assists in 17 games with Pittsburgh before going on injured reserve. The 28 games he missed was his longest absence since he was limited to 22 games during the 2011-12 season while dealing with concussion-like symptoms.