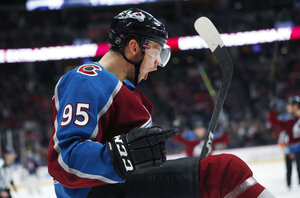 DENVER (AP) — T.J. Oshie deflected in the winning goal with 2:04 remaining and the Washington Capitals rallied for a 3-2 win over the Colorado Avalanche on Thursday night as Alex Ovechkin remained stuck on 698 career goals.

Defenseman Nick Jensen sent a shot into traffic that Oshie got a piece of with his stick, sending it past Philipp Grubauer to help the Capitals break a two-game skid.

Trailing 2-0 after the first, the Capitals climbed back into the game via the power play. Nicklas Backstrom scored on the man advantage in the second and Tom Wilson tied it by redirecting a shot on the power play with 7:12 remaining.

Braden Holtby settled down after a rocky start. He finished with 32 saves.

Grubauer stopped 35 shots, including seven from Ovechkin as the 34-year-old tries to become the eighth NHL player to reach the 700-goal mark. Ovechkin has gone three games without a goal since his hat trick on Feb. 4.

Andre Burakovsky and Mikko Rantanen had goals for Colorado, while Nathan MacKinnon added two assists as the team's five-game win streak was halted.

Colorado pulled Grubauer with about 1:40 remaining. but couldn't tie the game.

Backstrom had a power-play goal in the second period for the Capitals in part because of Ovechkin. The Avalanche were concentrating on No. 8 so intently that Backstrom got loose down low to redirect a pass past Grubauer.

A pivotal moment was in the second period when Colorado had a 5-on-3 opportunity for a minute. Holtby kept Colorado at bay to keep a 2-1 game.

Burakovsky and Rantanen scored on shots to the glove side of Holtby in the first period to give the Avalanche a 2-0 lead.

MacKinnon assisted on both to reach the 80-point mark for the season. He joined Hall of Famer Joe Sakic (81, 1995-96) as the Avalanche players to reach 80 points within the first 56 games.

Colorado kept constant watch on Ovechkin, shadowing him wherever he went in the offensive zone. Even then, he got his share of good looks.

"Everybody tries to shut down Ovi," MacKinnon said. "No one does."

Grubauer was just hoping Ovechkin, his former teammate, didn't reach the momentous milestone while he was in goal.

"I don't want to be part of that (history)," Grubauer told the media after the morning skate. “It would be nice to watch it on TV instead of being on the ice.”

NOTES: Capitals C Evgeny Kuznetsov was a scratch with an upper-body injury. ... Avs F Nazem Kadri is out indefinitely with a lower-body injury. ... Hall of Famer Peter Forsberg was in attendance and received an ovation from the crowd. ... Burakovsky scored his career-best 18th goal of the season against his former team.

Capitals: At Arizona on Saturday in their in the second of a three-game Western Conference swing.

Avalanche: Play the Los Angeles Kings on Saturday in an outdoor game at the Air Force Academy. It will be Colorado's second outdoor appearance. The Avs lost to Detroit at Coors Field on Feb. 27, 2016.