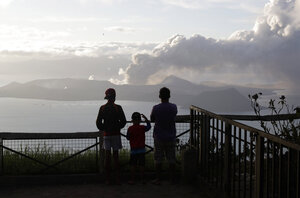 Your daily look at late-breaking news, upcoming events and the stories that will be talked about today:

1. GOP WEIGHS IMPEACHMENT TRIAL OPTIONS Republican senators are conferring privately about whether to allow a motion to dismiss the charges against President Trump or to call additional witnesses for testimony.

2. TRUMP ADMINISTRATION SHIFTS RATIONALE ON IRAN GENERAL’S KILLING Secretary of State Mike Pompeo and Attorney General William Barr give voice to the broader rationale, saying deterrence was a key component of the strike.

3. FALLOUT FROM DOWNED JETLINER CONTINUES Iran's judiciary says arrests have been made for the accidental shootdown of a Ukrainian passenger plane that killed all 176 people on board just after takeoff from Tehran last week.

4. 2020 PRIMARY HEATS UP WITH IOWA DEBATE The prime-time faceoff comes just 20 days before the state’s caucuses as polls suggest the nomination is truly up for grabs.

5. PHILIPPINE VOLCANO RESTIVE Tens of thousands of people flee as the Taal volcano near Manila spews lava into the sky and trembles constantly, raising fears of a more dangerous eruption.

6. ’I CAN’T GIVE UP UNTIL I FIND HIM’ An Australian villager whose small community was devastated by wildfires is not giving up hope of finding his “little man,” a dog named Kozi.

7. ‘I THOUGHT A WOMAN COULD WIN; HE DISAGREED’ Elizabeth Warren says Bernie Sanders told her during a private meeting two years ago that he didn’t think a woman could win the White House, an accusation Sanders denies.

9. LSU BEATS CLEMSON FOR TITLE Joe Burrow throws five touchdown passes, capping one of the greatest seasons in college football history by leading No. 1 LSU to a 42-25 victory against No. 3 Clemson to win the national championship.

10. BASEBALL PUNISHES ASTROS IN SIGN-STEALING SCANDAL Houston fires their manager and general manager after the pair were suspended by Major League Baseball for a sign-stealing scheme during the Astros' run to the 2017 World Series title.